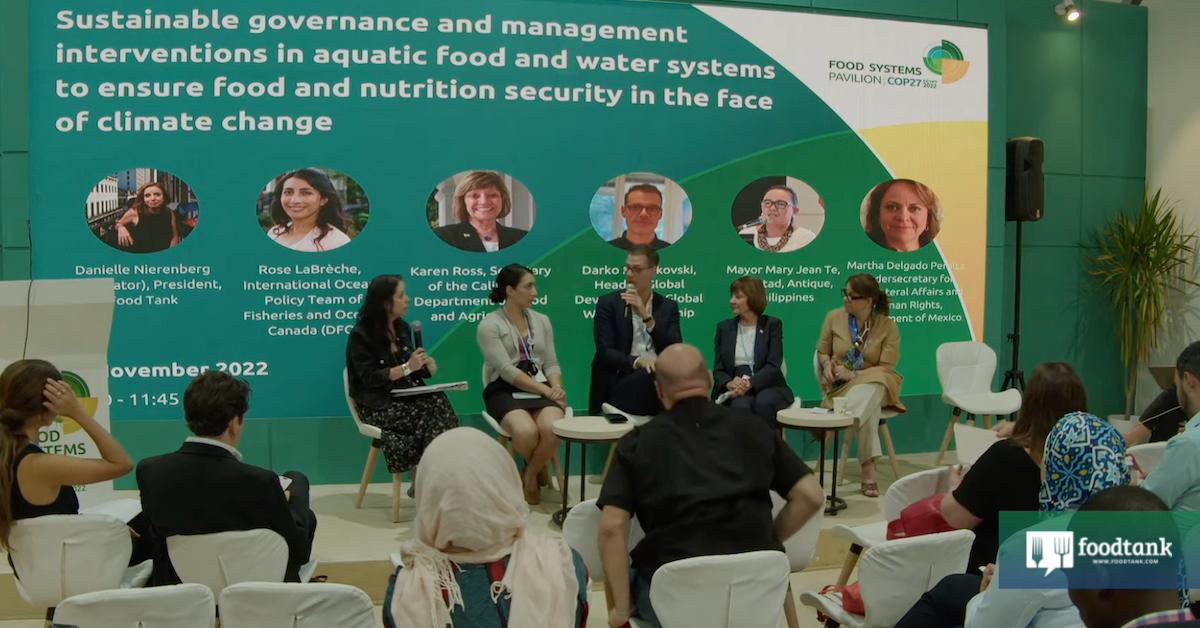 At a recent session at the United Nations Climate Change Conference, government officials and sustainability advocates discussed the role of aquatic foods and water management in building more resilient communities and l mitigating the climate crisis. The conversation was organized by the Environmental Defense Fund and the Food Systems Pavilion.

According to Dr Shakuntala Thilsted, winner of the 2021 World Food Prize and Aquatic Food System Champion, food system solutions “must move beyond land-based crops and livestock to underwater food,” she shared at the 2021 UN Food Systems Summit. “The potential for diverse aquatic foods and nutrients is ripe for the picking, providing a pathway to produce an adequate food supply without increasing carbon emissions while reducing ecosystem stress and habitat loss.”

Aquatic foods include marine and freshwater species that are wild harvested or farmed and cultivated, says Rose LaBrèche, manager of international oceans policy for Oceans Canada. Worldwide, 2,500 different species are caught or cultured for human consumption, including shellfish, plants and seaweed. These species support the livelihoods of more than 800 million people and provide protein to more than 3.2 billion people worldwide.

Globally, “millions of people live off the ocean and need the ocean to live,” says Martha Delgado Peralta, Undersecretary for Multilateral Affairs and Human Rights at the Ministry of Foreign Affairs from Mexico. It highlights the urgency of good ocean management, especially for ocean nations like Mexico.

A cross-sector group of over 30 members representing government, NGOs, academia, etc. launched the Aquatic Blue Foods Coalition in 2022. Its objective is to highlight the importance of aquatic foods and their role in solving the climate crisis and the fight against food insecurity.

Panelists argued that integrated water management is key to addressing the climate crisis and discussed the need to move away from a siled approach. “Water is the engine of change. Any extreme that has a negative impact on nature, on people, on society, on the economy, is driven by water, [from] drought, floods, water scarcity,” says Darko Manakovski, Global Development Manager for the Global Water Partnership. He adds that approaches to land management impact the global hydrological system, evaporation patterns, rainfall and food production.

“To break down this silo, we need to understand that water is a very local issue, and we need to invite local governments to the COP [COP]so that they show the problems that people are facing,” adds Delgado Peralta.

California is the Most productive agricultural state in the United States, but the state is also particularly vulnerable to water scarcity. “Climate changes everything in our water system,” says Karen Ross, secretary of the California Department of Food and Agriculture (CDFA). She says California’s ability to sustainably manage its aquifers and groundwater will determine its food production. Ross also points out that holistic climate models are important for understanding not only past water patterns, but also the impact of current and future water patterns on the California food system.

To better manage the world’s water supply, Manakovski says it’s crucial to understand the true value of water and move from viewing it as a public good to a commons, and treating water as a resource. collectively managed municipality. “It is important to share and use data to understand the impact of water availability on food security, irrigation and equity,” says Manakovski.

To achieve these goals, panelists emphasized that a diversity of stakeholders must have a voice, especially those who have been historically excluded, including women, youth and Indigenous peoples. “We’re facing volatility like we’ve never seen before,” Ross said. Addressing this issue “starts with thinking about people in the local community…and understanding[ing] who is not at the table to make better decisions.

The inclusion of fishers from different regions is also key to building the resilience of aquatic food systems. “If we really want to change the approach to sustainable development [water] management, it is mandatory to include not only the voices [of fishers], but to understand the significant needs of anglers around the world. And the needs are very different,” explains Delgado Peralta. For example, she says that NGOs in Mexico are working to help fishermen diversify their income with other types of activities. “It’s a mixture of different solutions that we have to come up with and start piloting with them,” she says.

And LaBrèche says finding ways to engage young people that are meaningful to them, such as through social media, can help involve them in decision-making processes.

“Young people need mentorship, they need support and they need inclusion,” says Delgado Peralta, explaining that young leaders have been trained to lead multinational negotiations. “We were better with their presence.”

Watch the full conversation below:

Articles like the one you just read are made possible by the generosity of Food Tank members. Can we count on you to be part of our growing movement? Become a member today by clicking here.