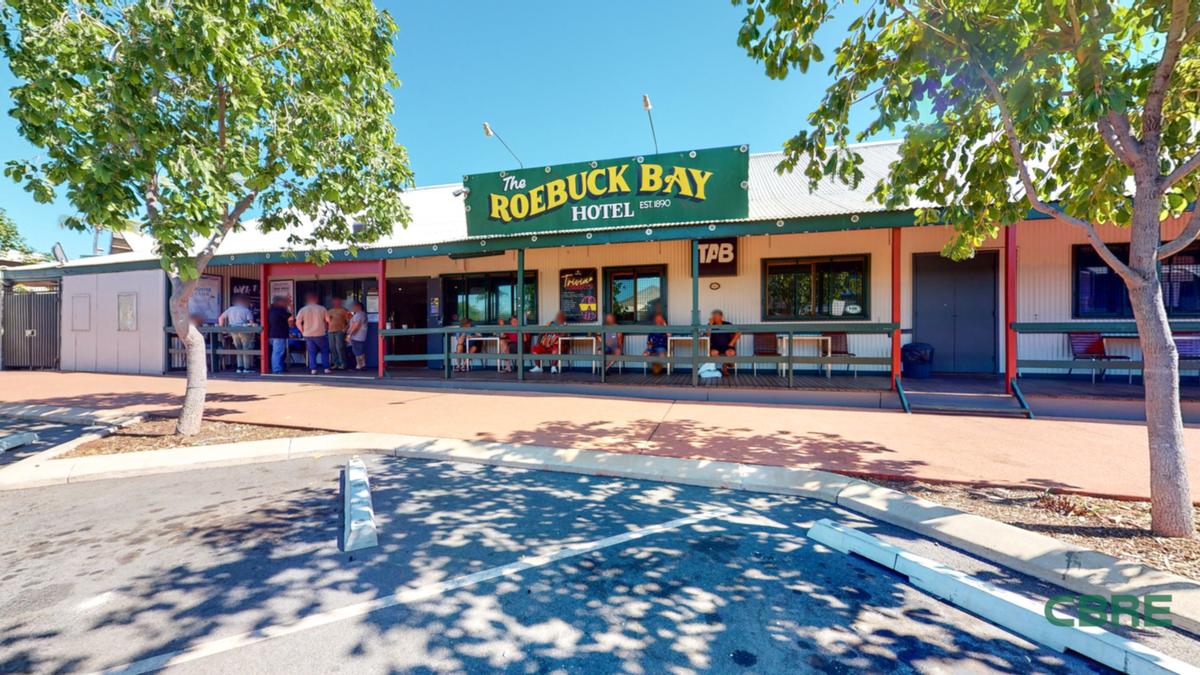 One of WA’s most iconic pubs, the Roebuck Bay Hotel in Broome’s Chinatown, is set to sell for the first time in decades, and change could be on the cards.

The Roey – as the 132-year-old hotel is affectionately known – is etched in the state’s history books, having been built by London jeweler EW Streeter to entice bead crews to spend time in the city from the northwest.

Now owned by the Coppin family, after it was purchased by the late Brian Copin in the 1980s, it is now one of the largest reception centers in the region. He earns $400,000 in revenue every week from his Bottlemart drive-thru bottle shop, Pearlers Bar and Bistro, modern sports bar, outdoor entertainment venue Oasis Bar, and backpacker motel and accommodation.

CBRE Ryan McGinnity and Derek Barlow noted that the venue derives 80% of its revenue from just a fraction of the 12,000m² landholding, making it ripe for development.

Mr Barlow said further development would capitalize on the property’s position in the heart of Chinatown, suggesting a commercial or tourist facility.

“With accommodation occupancy rates approaching 100% at weekends and peak periods, the development of new rooms is something that should be considered by any landlord, in order to further benefit from Australia’s domestic travel boom. , which we expect Broome to benefit from for many years to come. to come,” Mr. Barlow said.

Mr McGinnity said he expected it to spark international interest.

“Many places are listed as emblematic; few can truly claim to be that, but The Roey can,” Mr. McGinnity said.

“Anyone who has been to Broome has probably had a beer at the sports bar, enjoyed a meal at Pearlers or, if they have stayed long into the night, attended their Thursday night competitions, which have been going on for years. 1970.”

Closing of expressions of interest on September 1st.

Record price for the Cottesloe building

The building that houses the Cottesloe restaurant considered a local institution, Vans, has sold, fetching a record price of nearly $5 million.

Jack Bradshaw and Vincent Siciliano of LJ Hooker Commercial Perth sold it on behalf of the Carew Reid family who have owned the substantial property for decades. The buyer, whose name does not yet appear on the official registers, was presented by Eric Olivieri of Axia Immobilier d’Entreprise.

The sale price of $4.85 million for 1-7 rue Napoleon, which includes the neighboring Esola jewelry store, has an investment return of 4%.

The 382 sqm store reflects a land price of $12,630/sqm, which is a record price for the cosmopolitan retail strip of 40 stores.

Vans is a popular A-list hangout and has a lease until 2031, including options.

“One to seven Napoleon Street is the jewel in the crown of Perth’s most successful neighborhood retail strip. The role and popularity of strip shops has been bolstered by COVID as a place where people want to connect with their local communities,” Mr Bradshaw said.

“Despite negative press, international events and interest rate hikes, this result shows a strong appetite for businesses and well-located businesses.”

Mr Olivieri described the location and constant loyal patronage in the Main Street area as “unmatched”.

Another day, another hotel

Another hotel has been sold to a Singaporean buyer, with investment and asset management firm High Street Holdings buying Peppers Kings Square for around $26 million.

CBRE Hotels brokered the off-market sale, marking the second hotel in the city to be sold off-market to a Singaporean buyer recently.

The Quest serviced apartments on Adelaide Terrace have been quietly sold to a private buyer in Singapore for $41 million.

MSM Partner Daniel Yip said the 120-room, freehold hotel was a “great value-added opportunity in one of the fastest growing economies in the country.”

He said the hotel has several upside opportunities, including repositioning, reconfiguring the hotel’s ground floor and meeting spaces as well as the possibility of creating a rooftop multi-purpose venue.

The property will also be renamed Rydges Kings Square.

“Given the supply and demand dynamics of Perth’s hotel market, the location of the hotel and the size of the rooms, we are delighted to strengthen our relationship with EVENT Hospitality & Entertainment and bring the Rydges brand in Perth,” Mr Yip said.

Head of Capital Markets of CBRE WA, Aaron Desange said the new owners would benefit from a rebound in the Asia-Pacific business and leisure travel market.

Another off-market deal was in the sale of two adjacent Maddington industrial properties, which sold for $2.35 million.

“The sellers, who had owned the building since 2007, leased the property to their furniture manufacturing business and, while happy to sell, wanted to continue to run their business from the property.”

Mr Reyes said the strategic location is believed to have potential for future growth, as most buildings in the area represent an older style of construction.

“The region has seen several sites redeveloped into newer buildings as the demand for easily accessible industrial sites increases,” he said.

The EQ12 tower is a success

The EQ12 tower has become one of the most successful Class A buildings in the CBD, following a few big leases.

A $10 million renovation strategy appears to have paid off for Cape Bouvard in its EQ12 The Esplanade office tower.

Three full floors and part floor totaling 3500m² have been let, making it one of the most successful A-Grade buildings in the Perth CBD.

It has secured four tenants, including three tenants of an entire floor or more, occupying over 3500 m² over 12 months.

This comes at a time when landlords of many CBD buildings are struggling to rent space, especially to larger tenants over 1,000m².

CBRE James Phelan and Luc Bray negotiated the leases, all for a minimum term of five years at rents of approximately $550/m².

“From entrance to exit, the building has a cohesive theme and a carefully designed layout,” Mr. Phelan said.

“All spaces were rented within 12 weeks of completion and we saw notable improvements in commercial terms as the campaign progressed.

“The building’s location at the epicenter of an emerging CBD neighborhood has been an attraction and we’ve seen tenants come in from the suburbs, as well as expanding CBD tenants looking to settle on a single stage.”

Head of Cap Bouvard Tristan Cribb expects the building to be fully leased by the end of the year.

A rare and massive inner belt site with 60,000 cars passing by each day has hit the market in Rivervale.

Located at the corner of 105-107 Great Eastern Highway and 2 Acton Avenue, the 1,864 sq m site is being sold through Realmark Commercial’s Retail Sales and Leasing Manager Michael Richardson.

‘The property is suitable for a range of developments or uses such as fast food, childcare, offices or showrooms, and is ready for immediate development,’ he said.

“With large surrounding tenants such as AMPOL, BWS and nearby Crown Casino, the site is well positioned to be frequented by desired customers,” he said.