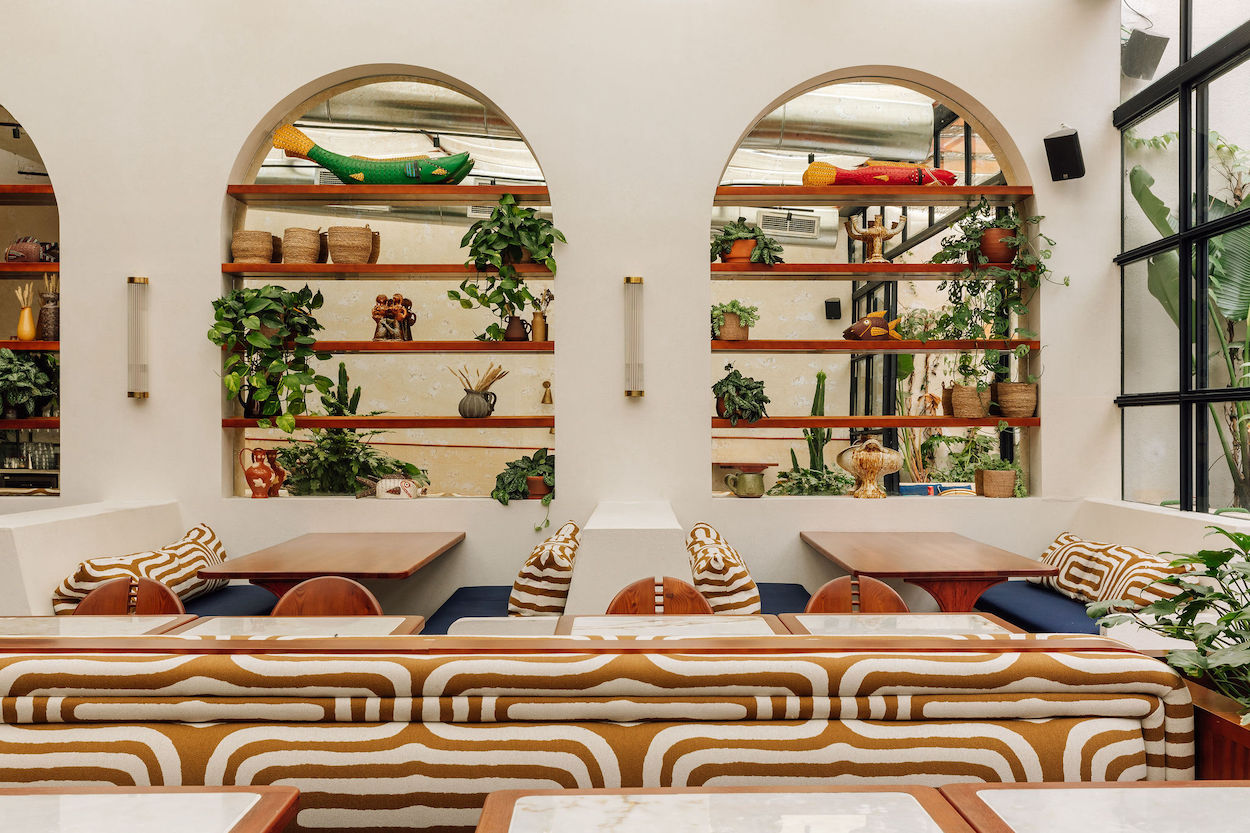 Our daily view of the world through the prism of design.

The Design Dispatch offers essential, expert-written news from the design world, curated by our dedicated team. Think of it as your cheat sheet for the day in the design delivered to your inbox before you’ve had your coffee. Subscribe now.

Got something our readers need to see? Submit it here

A seafood restaurant in Portugal needles the nautical thread

After fruitful collaborations on the hotspots of Lisbon, Java and Leonett, Belgian designer Perrine Velge of Studio Pim and restaurateurs Pierre d’Andrimont and Margaux Marcy reunite the group for a new tour. At Rosamar, the trifecta has created an ode to the sea that is not too “on the nose”. Details such as the archetypal Portuguese tiles in the traditional style azulejos style, long rolls of fabric to smother the sun and reference the sails of offshore boats, and honey-colored Murano glass seashells imbue the space with a sense of timelessness and nostalgia.

A mish-mash of retro posters, along with illustrator and ceramicist Henriette Arcelin’s hand-painted nautical mural, heighten the breezy vibe and set the stage for a freshly-bought menu of grilled seafood and delicacies. raw bass. One look at Rosamar’s flawless execution and it becomes clear that the project’s brain trust has something special – maybe it’s kismet? The trio went to elementary school together and years later reconnected on Instagram. Something tells us that this won’t be the last time they meet. —Nate’s story

Sou Fujimoto unveils a hotel with an undulating green roof on the island of Ishigaki, Japan.

“Sou Fujimoto has unveiled a ‘Not a Hotel Ishigaki’, a new project in the southwest of Ishigaki Island in Okinawa, Japan. The unique tropical resort hotel sits on an open circular base in all directions to the surrounding natural landscape.The main feature of the building is the undulating roof covered with vegetation.Its shape allows access from the terraces of the building, creating an interior landscape, with meadows, relaxation areas and a mirror of water reflecting the sky and the singular tree nearby. [H/T ArchDaily]

Amazon reports that its carbon footprint increased by 18% in 2021.

“Amazon.com Inc. said its carbon footprint grew 18% in 2021 as the company’s rapid growth during the pandemic outpaced nascent efforts to reduce its contribution to global warming emissions. The world’s largest online retailer emitted 71.54 million metric tons of carbon dioxide equivalent last year, Amazon revealed Monday in an updated edition of its sustainability report. That’s an increase of around 40% since the company first disclosed the figure, with data from 2019.” [H/T Business of Fashion]

A giant sculpture by Jean Dubuffet will be moved from the Thompson Center in Chicago.

“29 foot high sculpture of Jean Dubuffet Monument with standing beast (1984), a fixture outside Chicago’s James R. Thompson Center since before architect Helmut Jahn’s famous postmodern building was even completed in 1985, will soon be found elsewhere. After the state of Illinois sells the Thompson Center to Google, through a consortium of developers that will retrofit the iconic building to the tech giant’s specifications, it will move the ten-ton Dubuffet sculpture about three blocks away south of 115 South LaSalle Street, a former bank building the state recently purchased to replace offices it is losing at the Thompson Center. [H/T The Art Newspaper]

Adidas teams up with Stella McCartney to design a new collection of maternity sportswear.

“Activewear brand Adidas has collaborated with British designer Stella McCartney on a collection of maternity activewear designed to fit women’s bodies ‘through every stage of motherhood’. The Fall/Winter 2022 maternity collection from the brand features five main pieces, including what Adidas has described as its first performance nursing bra. [H/T Dezeen]

A study shows that female painters earn 10% more than their male counterparts.

Are men 10 times better at painting than women? The market may not be deliberately fooling us, but it certainly gives the impression that male artists are much better than female artists. The most expensive painting ever sold, Leonardo da Vinci’s Salvator Mundi, fetched $450 million while the world record for a female artist, Georgia O’Keeffe, is just $44.4 million, a tenth less. And further down the chain, a 10:1 disparity still stands. Helen Gorrill, author of Women can’t paintstudied the prices of 5,000 paintings sold around the world and discovered that for every pound a male artist earns for his work, a woman only earns 10 pence. [H/T The Guardian]

Google is launching an initiative called the “simplicity sprint” to help improve efficiency.

“Google is launching a new effort called ‘Simplicity Sprint’ with the goal of improving efficiency and improving employee focus in an uncertain economic environment. The company Alphabet held its regular general meeting last Wednesday, and the tone was somewhat urgent as employees expressed concern about the layoffs and CEO Sundar Pichai asked employees for their input, according to attendees and related internal documentation viewed by CNBC. is not where it should be, even with the number of employees it has, Pichai told employees at the meeting. [H/T CNBC]

As the pandemic continues, conversation pits are making a comeback.

Book publishers would do well to turn to vinyl records for boost sales.

Dior makes its debut digital clothes and a custom vehicle through Gran Turismo 7.

All stories
Previous Next