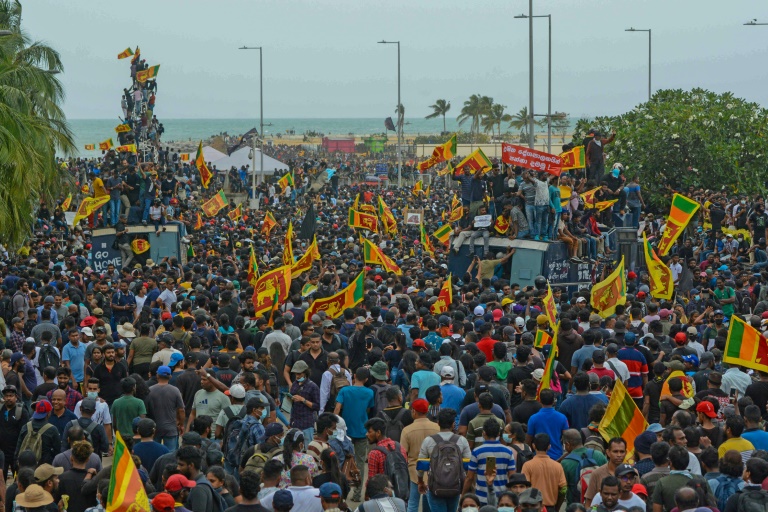 Sri Lankan President Gotabaya Rajapaksa has said he will step down in the coming days after protesters stormed his residence and forced him to flee offshore aboard a navy vessel.

His announcement came after hundreds of thousands marched in Colombo, capping months of protests by people desperate and furious over the island nation’s severe economic crisis.

Gotabaya Rajapaksa, 73, president since 2019, is just one member of a clan that has dominated politics in the South Asian nation of 22 million for decades.

Brother Mahinda, 76, was president for a decade until 2015 and oversaw the bloody end of Sri Lanka’s long civil war in 2009 when Gotabaya – nicknamed “The Terminator” – led the security services.

Under Mahinda, Sri Lanka moved closer to China and borrowed billions of dollars for vanity projects like cricket stadiums and airports as well as a deep-water port since leased from Beijing.

– What happened with the economy? –

The vital tourism sector was first hammered by Islamist extremist bombings of churches and hotels in 2019 and then by the coronavirus pandemic.

With its coffers still depleted by government tax cuts, Sri Lanka ran out of the foreign currency needed to import everything from medicine to food and fuel.

Even with help from India and others, in April the country defaulted on its $51 billion foreign debt and has been in bailout talks with the International Monetary Fund for months.

– How did this affect ordinary people? –

Sri Lankans have endured months of medicine and food shortages and power outages as gas stations run out of petrol and diesel despite appeals to Russia and others for oil to reduced price.

Unofficial inflation rates are just behind those in Zimbabwe, making many goods – if they can be found – too expensive for many people to afford.

The United Nations has warned that Sri Lanka faces a serious humanitarian crisis, with millions of people already in need of aid.

More than three-quarters of the population have reduced their food intake due to the country’s severe food shortages, according to the UN.

– How is Rajapaksa still in office? –

After months of protests, Rajapaska loyalists went on a rampage in May. At least nine people have been killed in nationwide violence while the homes of ruling party members have been set on fire.

Wickremesinghe has little to show for his efforts and on Saturday his house was burned down by protesters – he was absent – although he also offered to quit.

According to the parliament speaker, Gotabaya – as protesters occupy his presidential palace and pose for selfies – will officially step down on Wednesday to ensure a “peaceful transition”.

A successor is to be chosen by a vote in parliament within a month of Rajapaksa’s departure, but the president promised a new leader within a week. However, on Sunday it was unclear who, if anyone, would be able to garner enough support among lawmakers to succeed Rajapaksa.

“We are heading towards dangerous uncertainty,” Tamil minority MP Dharmalingam Sithadthan told AFP. “Gota should have resigned immediately without leaving a power vacuum.”