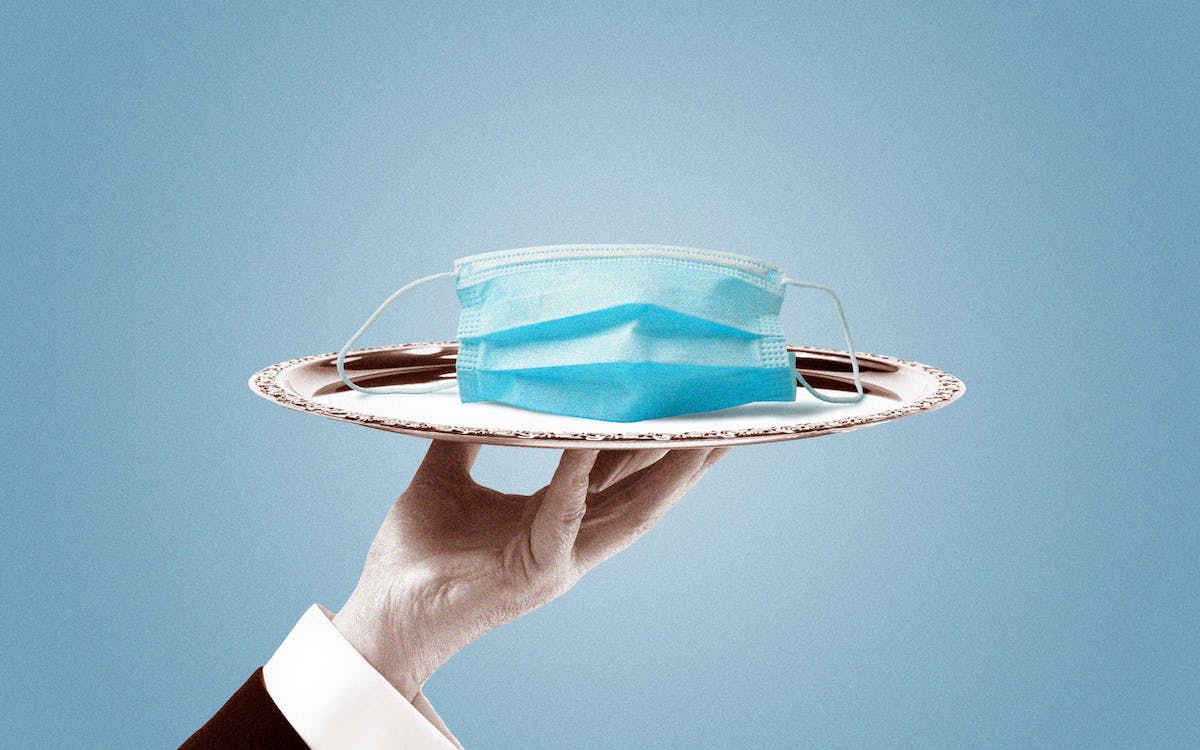 Restaurant workers are fed up with politely asking – Texas Monthly

As the highly infectious delta variant of the coronavirus increased this summer, Texans rummaged through their dresser drawers and glove boxes to find those discarded masks – or they didn’t. Over the past few months, the pro and anti-masker divide has grown even more entrenched and political, and emotions are resounding in the hospitality industry. Nineteen months after the start of a pandemic, when many of us have long since resumed activities such as dining out, it’s easy to forget that restaurant and bar workers still find themselves in First line.

In the first phase of the pandemic, workers could give their clients a statewide mask warrant. This ended in March 2021. A few months later, on July 29, Governor Greg Abbott signed a decree which allows private businesses, including restaurants and bars, to set their own mask rules, while banning cities and other government entities from enforcing warrants. The restaurateurs and employees were alone.

Texas monthly asked half a dozen restaurateurs and managers how they and their staff are doing. Whatever masks policy they adopt, all are concerned about the health of their workers and feel that their servers have been turned into de facto police, but without any law enforcement to back them up, to less, of course, that a disagreement gets heated. . And nobody wants that.

We were among the first to hide in 2020 and we were very optimistic to control everything we could. At the time, I felt very comfortable saying, “Look, this is a municipal rule or it is a state law and we are being asked to comply with it”. Last year I lost sleep over what could happen if a guest got sick in one of my restaurants. But telling them what risks they should take is pretty burdensome; they know their status better than I do.

We are now in 2021 and I have the impression that it is not the job of a restaurant to manage the health of its customers. We have posted signs, but I just control the things I can, which is my staff and my policies. I will not put my staff at risk of having a fight with an unmasked person spraying saliva in their face, when that person will sit down and take off their mask to eat anyway. Even if the state presented a tougher policy today, I don’t think it would be enforceable, this cat is so far out of the bag. Everyone made their decision and now we’re just discussing which rules we want to choose, not even what it means when everyone chooses their own rules.

Restaurants have not made the rule of the original mask. We weren’t asked, but suddenly, we took it upon ourselves to apply it. I would say that at our two fine dining restaurants twenty to thirty percent of the patrons come in with a mask, but at the sports bar maybe five percent wear one – and some people laugh at them. It’s even harder [since the state mask mandate was lifted] because the public has become even more politically polarized about it. If I were to post on social media – let’s say Facebook – and say that everyone who walks into our restaurants is required to wear masks, I would have thirty people saying, “You saved lives” and thirty saying, “I will never darken your door again, you are not texan! And if I said it the other way around – we’ll never put a mask on you – some would say, “God bless you for freedom, you are a great American!” and others would say, “You’re killing people right now. This is an impossible situation for restaurants. We put masks on all of our employees who deal with the public, but I don’t require them for customers. It’s a no-win and I don’t know the answer. [Bonnell has chronicled his pandemic experiences in Carry Out, Carry On: A Year in the Life of a Texas Chef.]

Kevin Fink, chef and co-owner of Emmer & Rye, Hestia and Henbit, all in Austin

We wear masks, and we ask guests to do so when they are not at their table. At the start of the pandemic, we confronted them in the dining room and made sure they followed our policy. It was really difficult. But several months ago, something became clear to me. I flew on an airline where a flight attendant kept pacing up and down telling people to keep their masks on. It created an antagonistic scenario for them and it took a toll on her – think about her stress and anxiety. I wanted to make sure our team was safe and secure, but I didn’t want them to have that added burden of having to pinch everything. So we put the emphasis back on hospitality. We only have a short time to establish a relationship with a guest, and if we take a lot of time to discuss how they wear their mask or whatever, it just makes it confrontational. This time around we are making our mask policy clear, but if a guest is very vehement on the other side, we are not taking on the role of controlling that. We don’t put ourselves in the crosshairs by confronting guests one way or the other. It is not hospitality.

We have a sign on the door with a beautiful drawing by a local artist that says, “Please wear a mask to enter our space,” and there is a little peace sign. I would say that ninety percent of the people who come to Pharm Table for dinner wear masks. I have Republicans and Democrats as clients, and I try not to alienate anyone. But the past two weeks have been a little crazy, with new abortion, guns and voting laws. Talk about a triple whammy.

I have an ethical responsibility to ensure the safety of my employees. It’s so shameful that the Texas government – the people we elect to represent us – is forcing us business owners to be the cops for the mask. This is what the government is supposed to do! And if someone says categorically “Absolutely not,” what are we going to say to them? What if another customer says, “Why don’t you protect us all? This leaves us on tiptoe on eggshells. We can’t force anyone, because the downstream effect could be a social media hubbub or smear campaign, or, God forbid, a protest. [of our restaurant]. We have to sort of tuck our tail between our legs and ask for it gently, gently.

About six weeks ago, we noticed that more clients were intentionally wearing masks and that got me thinking. How to make it comfortable for the most nervous customers or the most sensitive to COVID? So now we demand masks for all of our employees. Without being in politics, the easiest way was to create a safe place for our employees. It’s not that hard to do or apply; we treat it as part of a uniform. As a business owner, I don’t want to alienate anyone because people are really polarized. It’s hard. Our two restaurants are both Feges BBQ. One is located at Greenway Plaza [an office complex] and it’s been open for about four years. Our second location is about three months old and is in Spring Branch. It offers a barbecue but also plate dishes and a very nice wine list. I guess thirty to forty percent of the people in our neighborhood wear masks. At our downtown Greenway Plaza location, it’s about 100 percent, probably because the building demands it.

Chris Shepherd, chef and owner of Georgia James Steakhouse, One Fifth and other restaurants in Houston

With our staff, if you are vaccinated, it is at your discretion to wear a mask. If you are not vaccinated, please wear a mask. We ask politely [that customers wear] masks at the entrance. We would like to be able to apply it, but it will not happen. It’s just an uphill battle. He fell in our towers. It’s hard. If someone gets belligerent about it, there is literally nothing I can do. It’s really difficult. We were asked to deal with it, and it became a political issue rather than a security issue. My managers get yelled at by people who say “It’s my freedom! It’s my right!”

[But the pro-mask, pro-vaccine side can be difficult too.] We had a client who redeemed Georgia James for a private event and asked everyone who had just had proof of vaccination. One of the guests reported Georgia James to the TABC [Texas Alcoholic Beverage Commission] even if we haven’t made the rule. I think TABC sent us a letter after [but no action was taken]. Losing your liquor license or having it suspended is over.

These interviews have been edited slightly for length and clarity.

🌱 Restaurant flight on the south coast + Blue whales on and off