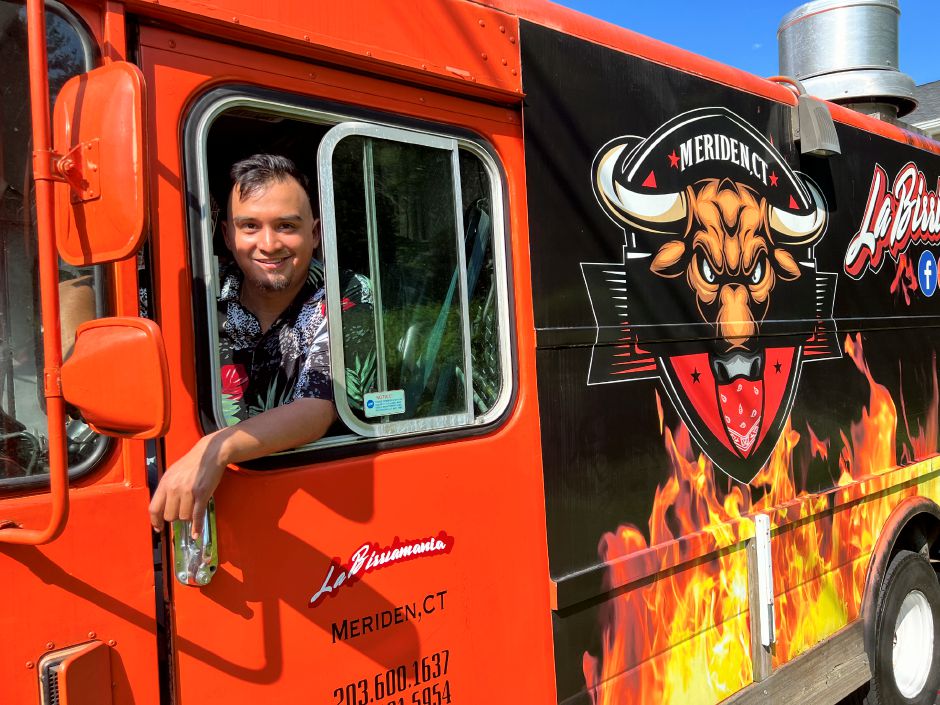 After their grand opening at Meriden Green in March 2021, the taco truck has grown in popularity and is now sold out through November.

Owners, Noely and Antonio Salazar, started the business in 2019 from their home in Meriden.

“It started when my husband’s brother, who is a Marine, Facetimed us from California,” Salazar said. “He was eating something during the call and we asked, ‘what is this?’ because it looked so good and he said ‘Birria, it’s so popular here’ and we knew we wanted to try them.”

The couple got to taste the tacos during a family reunion.

“After that I knew we had to make them,” said Antonio Salazar.

The couple then started cooking the dish at family gatherings and when they posted a picture on social media, many people asked if it was for sale.

“That’s when we knew it was time to buy a truck,” he said.

While on a January 2021 family vacation in Mexico, the Salazars saw a food truck for sale online. Back in Meriden, they quickly bought it and decided to give it their all. Noely Salazar quit her interior design job. In March they were ready to open.

At the time of starting the food truck, the couple was expecting their third child.

“We worked so hard to make it happen and now we bring our kids with us when we can.” said Antonia Salazar.

In recent months, La Birriamania has traveled throughout Connecticut.

“We’ve been to Guilford, Avon, Hartford, and we do breweries and events as well,” Noely Salazar said.

The couple receives help from both of their families.

“…I try to help in any way I can, whether it’s watching the kids or helping with the truck,” said Delfina Granados, Antonio Salazar’s mother.

Lucía Pacheco, owner of Mexican store San Juanito in Wallingford and mother of Noely Salazar, will run the second food truck in Meriden.

“I’m a little nervous, but it’s a responsibility I know I can handle,” Pacheco said. “My daughter motivates me. I know she says I motivate her, so in reality, we motivate each other.

The reason for opening a second food truck in Meriden is the customers.

“We never stopped thinking about our customers in Meriden, so since we got booked, we want our second taco truck to stay in Meriden,” said Noely Salazar.

The couple would like the truck to be open in August, but if not, then definitely by the end of the year.

Birriamania will be at the New England Taco Festival in Guilford on July 30 and 31 and at the Connecticut Taco Festival 2022 in Granby on August 20.

Vir Sanghvi’s Rude Food: Every Festival is a Holiday