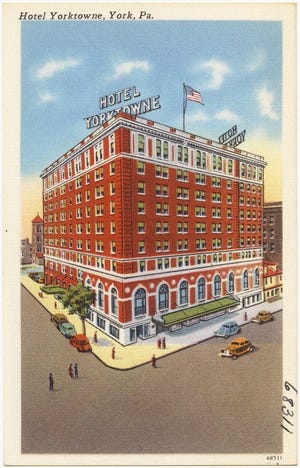 When Anthony Stabile and other members of the Marine Corps League raise the flag above the restored Yorktowne Hotel on November 11, they will continue a tradition.

Yorktowne was crowned with an American flag in the years following its opening in 1925.

In 1995 the owners of the Yorktowne Hotel wanted to do a big 70e birthday statement. They ordered the installation of a 70 foot roof pole to serve as a large birthday candle.

A 20ft by 30ft flag was hoisted to its top in June, with floodlights marking its place. The idea was to make an exclamation mark high enough that it could be seen atop Reeser Peak as motorists entered York County from the north.

Luckily the hotel received this tall post because it kept Yorktowne as the tallest building in York even after the York County Judicial Center was built about 10 years later. He kept intact the saying “Nothing rises higher than Yorktowne”.

York County’s Anthony Stabile was there atop Yorktowne on Flag Day in 1995. Indeed, he organized the Marine Corps League members who hoisted the banner after veteran Joe Stees got the big new flag and coordinated the event with the Yorktowne.

It wasn’t the first — nor the last — time that Stabile played a significant role in memorial ceremonies in the county that became his home after his military retirement.

And the 95-year-old will once again be involved in the Veterans Day rooftop flag raising just days before Yorktowne reopens.

Anthony Stabile’s military career began during World War II, a rocky start that brought him to the Chinese theater of war as a mechanic.

He then served in the Korean and Vietnam wars.

“Ninety-five percent of the time,” he said, “I was in motor transport maintenance.”

A career spanning three major wars seems like a rarity.

That’s not the case, Stabile said. Two of Anthony’s brothers also served in these wars, one in the Army and the other in the Air Force. Three brothers. Three wars. Three branches of service.

That said, veterans living in the York County area today who served in all three wars would be rare.

Stabile, born in western Pennsylvania, served around the world before retiring as a Navy captain in 1972. He moved to York that year and worked at York Stone and Supply Co. as a maintenance supervisor.

His retirement career is marked by a long list of voluntary activities.

After:Dome: York’s tiny tram station stood in the middle of the center

I remember Stabile appearing in the York Daily Record to promote these projects as part of the fundraising campaign with the public. You would look at his contributions in the military and his enthusiasm for the project he was supporting, and, well, he’s one of those members of the community that you couldn’t say no to.

“I wanted to stay involved in the military in some form after I retired from the Marine Corps,” he said. “There was a need for York County veterans to be recognized, and I wanted to play a part in that. Once a sailor, always a sailor!

The subject of buildings that scraped the sky has been on the minds of York residents for decades.

William C. Goodridge, a former slave businessman, built a store in the late 1840s that stood four stories tall, plus skylights. Call the height of his building in the northwest corner of Center Square 4 and a half stories.

As noted in correspondence, John Hartman would not accept that the tallest building in York belonged to a black man. He built his building five stories high. And although stories have been added and subtracted over the years, today it stands in the southeast corner of the square.

In the 1890s, the Colonial Hotel across from the Hartman Building rose to what appeared to be eight stories. But a fire broke out on the Mansard roof, part of the design by York-based firm Dempwolf. Did that make seven stories?

Later that decade, the Dempwolf-designed York County Courthouse came with a 155-foot dome, making this clever building perhaps the tallest.

But not for long. In 1925 the Yorktowne rose, measuring 11 stories, at least to the eye. This seemed to decide the battle for heaven.

Then, in 2004, the seven-story York County Judicial Center was opened but could not compete with the Yorktowne and its flagpole on the roof.

The number of stories in Yorktowne depends on how you count them.

The National Park Service defines it at eight stories. But the federal agency notes that it has a two-story terracotta base, a seven-story upper block and a terracotta ceiling.

As for the floor plan, the hotel has 12 floors and 14 elevator stops, with two basement levels not included in this tally.

Years ago, a reporter from the York Daily Record/Sunday News looked at the height of the Judicial Center in relation to Yorktowne and wrote: “It has seven stories, making it the tallest building in the center- city ​​of York, if you don’t count the mast of the Yorktowne Hotel.”

But you have to count that flagpole because it carries a flag that means a lot to Stabile, countless other veterans, and, truly, every resident of York County.

Stabile called me several weeks ago to let me know about the private ceremony celebrating the raising of the flag atop what is now called the Yorktowne Hotel, Tapestry Collection by Hilton, on November 11. This is a non-public event that takes place in the middle of construction in the days before the reopening of the hotel later in the month.

It will take at least four members, he said, given the size of the flag.

Meanwhile, Yorktowne prepares to raise the flag. The mast was reported at 70 feet in 1995, but a new measurement made it 7 feet and changed in height.

Lighting has been upgraded with LED technology.

When veterans return to America from overseas assignments, Stabile says, that’s what they’re looking for: the flag.

The same is true when veterans arrive in York County.

“Now when they come home,” he said, anticipating the raising of the Veterans Day flag, “they can see it flying here.”

Jim McClure is a retired editor of the York Daily Record and is the author or co-author of nine books on York County history. Join it at [email protected].