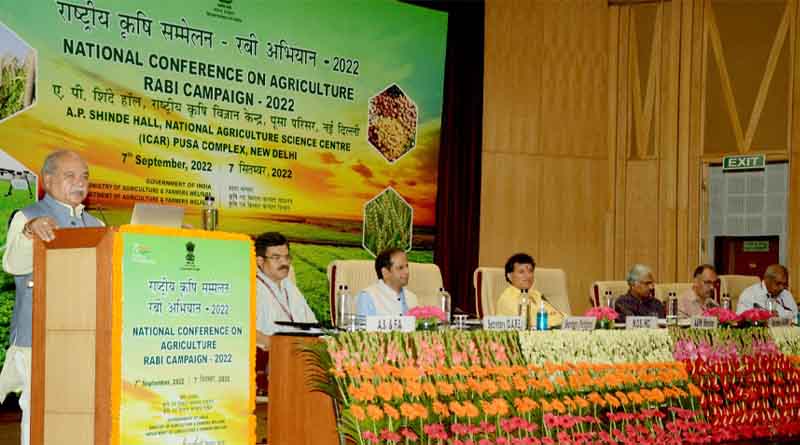 September 09, 2022, New Delhi: The National Agriculture Conference for the 2022-23 Rabi season was held yesterday in New Delhi to discuss the upcoming Rabi season planning and crop coverage. Union Agriculture Minister, Mr. Narendra Singh Tomar, speaking during the inaugural address of the National Conference, said, “In accordance with the 4e According to the advance estimate (2021-22), the foodgrain production in the country is estimated at 3157 lakh tons, which is 50 lakh tons higher than the foodgrain production in 2020-21. Total production of pulses and oilseeds in 2021-22 is estimated at record highs of 277 and 377 lakh tons respectively.

He further mentioned that Pradhan Mantri Fasal Bima Yojana, under which Rs 1.22 lakh crore was given to farmers as compensation for the loss of their crops. Mr. Tomar said that all farmers should be covered by this scheme. This will allow small farmers in particular to feel safe. He said that soil productivity is decreasing due to the use of chemical fertilizers, hence the promotion of organic and natural farming.

The Minister welcomed the success of Mustard Mission in the first two years of its implementation. Mustard production jumped 29% from 91.24 to 117.46 lakh tons in the past two years. Productivity jumped 10% from 1331 to 1458 kg/ha. Rapeseed and mustard area increased by 17% from 68.56 lakh ha in 2019-20 to 80.58 lakh ha in 2021-22. He appreciated the farming community and state governments for this commendable achievement. Increased mustard production will help fill the gap in palm and sunflower oil imports. The government is currently implementing special soybean and sunflower missions modeled on the mustard mission.

Mr. Tomar said the central government has started working on digital agriculture to bridge the gap between farmers and the government so that farmers can enjoy the benefits of government programs seamlessly. We must also work together on the mission of digital agriculture. He also said that with the efforts of the Prime Minister, the year 2023 will be celebrated as the International Year of Millet. India is going to lead this program all over the world.

The purpose of this conference is to review and evaluate crop performance over previous harvest seasons and set cropping targets for the rabi season in consultation with state governments, ensure supply essential inputs and to facilitate the adoption of innovative technologies to improve production. and crop productivity.

Mr. Manoj Ahuja, Secretary of the Department of Agriculture and Farmers’ Welfare, informed that the country has maintained an upward trend in the production of food grains since 2015-2016. Total production of food grains has increased by 25% over the past seven years, from 251.54 to 315.72 million tonnes. Oilseeds and pulses followed the same trend. Exports of agricultural products (including seafood and plantation products) for the year 2021-22 crossed $50 billion, the highest ever for agricultural exports.

(For the latest farming news and updates, follow Krishak Jagat on Google News)

Microplastics from waste dumped in the oceans can enter the food chain: NCPOR: Goa News