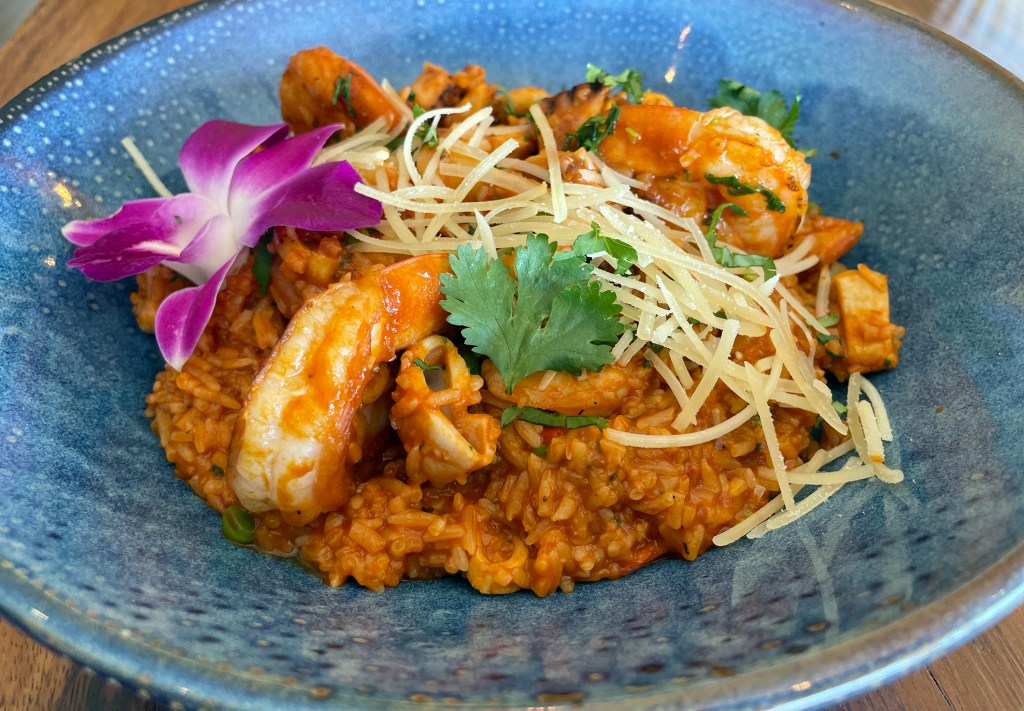 The impressive entrance to Peruvian restaurant Ayawaska Hilltop in Novato, formerly Hilltop 1892, leads you up the hill, past the stairs (and handicapped accessible ramp) to the front door, where you are Greeted by valets who give you a friendly smile and explain that parking is free. A nice welcome. I wish I had my car washed recently. A full detail is really in order.

As we climbed the ramp, the clink of forks against plates and the voices of many happy diners intensified. It was a Friday night and the restaurant, which opened last summer after a major renovation, was packed. I was glad we made our reservation earlier in the week.

We were shown to our table on the tiled veranda with large windows facing the southwest and stunning views. It was a chilly evening and fog was just beginning to roll in from the Pacific.

Focusing our attention on the cocktail menu, my friend chose the traditional Peruvian cocktail Pisco Sour ($15) and I, intrigued by the name and ingredients, ordered! Vamos Boys¡ ($16).

Pisco is to Peru what cognac is to France. It is a brandy made from Peruvian grapes brought from the Canary Islands by the Spaniards when passing through the islands on their way to the New World. Mollar and Negra Criolla grapes arrived, naturally crossed and created Quebranta grapes, which are often used to make pisco.

The Pisco Sour arrived in a small cup. Well balanced with a frothy top and a traditional garnish of bitters, it was delicious.

My cocktail, consisting of pisco, Fiorente elderflower, vermouth, Tio Pepe sherry, cider and blackberries, could have gone wrong but it absolutely didn’t. The ingredients came together so tasty with nothing sticking out over the hips. I wish I had a second.

Several of the cocktails come in whimsical containers, like the Tulum ($16) in a brightly painted skull and the Ayawaska Colada ($22) in a shiny brass pineapple. There were several other cocktails that I would like to try another time. If all their ingredients go together as well as my cocktail, it would be a pleasure. Also, it would be fun to see what other fun containers they’re featured in.

Ayawaska’s food presentations are also photogenic. Ceviche Clasico ($22) arrived in a round, deep marine aqua platter. A heap of mouth-watering little cubes of rockfish ceviche were centered in the bowl with choclo, large Peruvian corn kernels on one side and crunchy corn kernels on the other. A bright orange slice of mildly spiced sweet potato separated them. The savory potato was so amazing we wished we could order a whole plate of it. The fish and vegetables sat in a shallow pool of the cream-colored “leche de tigre” marinade.

A volley of pickled red onions tops the dish. The ceviche is reason enough to come back to Ayawaska often.

The three fried Empanadas de Lomo ($16) were crispy, blistered, and generously filled with beef tenderloin, onions, tomatoes, potatoes, and cilantro. They were so well seasoned that they really didn’t need the rocoto aioli that came with them, but that didn’t stop us from delving into them again and again. Rocoto peppers are hot enough but the aioli was not. My dining companion, sensitive to spicy hot dishes, didn’t find it off-putting. I, on the other hand, like spicy foods a lot, so I have to keep that in mind to temper my rating of food heat.

Other empanadas on the menu include a chicken version ($15) and a vegetarian version ($14).

Our main plates, Aji de Gallina ($24) and Arroz con Mariscos ($28) arrived quickly, seemingly too quickly to have been assembled for our order. The portions were large and there was a lot of seafood in the Arroz con Mariscos, but the texture was too soft. While the Aji de Gallina is basically a sauce with poached chicken strips poured over rice, the version we were served was fully mixed, echoing the same texture as the mariscos. Other options ($24 to $36) include a gluten-free Adobo de Cerdo, stewed pork, and Second de Carne, a traditional stew of Peruvian beans and braised ribs.

Dessert time. Of the 12 options, all $14, the Alfajor con Helado sounded enticing. Unfortunately, the Peruvian shortbread cookie didn’t have much flavor even with the dulce de leche topping which, unlike the bounty of the other dishes on the menu, was very thinly spread. There is a choice of vanilla or lucuma ice cream served with the cookie.

A more satisfying dessert was Suspiro a la Limeña, which arrived in a small corked glass jar. The name translates to “sighs of a lady from Lima”. It was a thin egg custard made with dulce de leche and topped with a port flavored meringue. Like the lady’s sighs, it’s soft and light. We really enjoyed it.

Ann Walker is a freelance writer from North Bay. Send him suggestions, comments and questions at [email protected]

admire the food through the filter of art at the Crawford